Veggies and Other Fun Stuff

I took this picture because I thought the fruits and veggies looked so pretty on my counter. Yes, I did stand on a chair to get the shot...LOL. Do you see that eggplant? Well, last night, I made eggplant parmesean--oh, it was sooooooo good, and it was so simple. I just peeled the eggplant, and cut it pretty thin--then I laid the slices on paper towel and sprinkled salt on them--( I will cut and paste the recipe I used below). 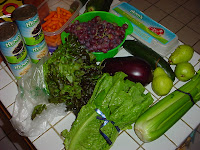 ..and some potatoes. This bag of potatoes cost $1.50...it will be used for baked, french fries, roasted, etc---for mashed, I bought this box of potatoes at Costco, that my Grandmother suggested--the box was about 6 dollars and it has individually packed bags of mashed potatoes--8 servings in each bag, and there 112 servings, and the mashed potatoes are sooo good-----I am usually not a big fan of convience food, but this was good. 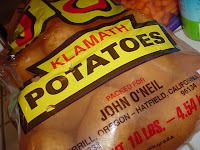 Here is the box of mashed potatoes I got from Costco--> 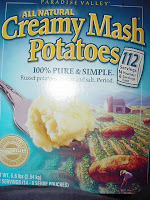 ...and I bought hummus----it is a favorite in this house--I actually used to buy it for me, but my kids caught on, and love it--it was on sale at the Farmer's Market for 2 dollars a container. Have any of you ever made your own, I keep meaning to try it, but I keep forgetting to add chick peas to my list..LOL--oops. 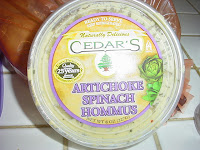 Well, this post went in its own direction--I just started typing and off my fingers went --I am so glad it is Friday ---I will be doing laundry this weekend--I am also going to take my Grandma to church on Sunday---working on my notebook, making a list of never ending chores, planning dinners for the week, shopping--etc. What are your plans for the weekend?


As always, I hope all who visit me, have a blessed weekend, and if you leave me a comment, I will come by your blog to visit too--I just love all the wonderful blogs and everyones wonderful posts about there daily life as a homemaker:))
Here is the Eggplant Recipe-->

Eggplant Parmesan Recipe
*I tweaked the recipe a bit--I used Prego spaghetti sauce, and I bought freshly grated Parmesan at the store. I left the whole recipe as is, just in case some of you are interested in the spaghetti sauce recipe and such.

Easy Spaghetti Sauce
Directions:
Pre-heat your oven to 350°.
Peel your eggplant, and cut into roughly quarter-inch slices. Lay these out on paper towels and sprinkle salt over the top of them. This is to get some of the bitterness and water out of them. You'll want to let these sit for around a half hour, at the end of which dab them with a paper towel to remove the liquid and excess salt.
In a bowl, mix your eggs and milk with a fork, like you were going to make scrambled eggs. Put your flour and salt and pepper on a plate, and mix together with your fingers - this is for dredging the eggplant. You may need more flour, but you can add that to the plate later.
Pour 2 - 3 tablespoons of olive oil into a sauté pan, and set your heat to medium to medium-high. Now take your slices of eggplant, and, one by one, dredge in the flour, tap the excess flour off, dip into the egg mixture, then dredge back through the flour. Once you've done this, put the slice into the pan with the oil, and cook for approximately 2 or 3 minutes a side, carefully flipping with a pair of tongs or a fork, until the batter becomes a nice golden brown and is crispy. Typically I only do 4 or 5 slices at a time, and hold off on dredging the eggplant until I'm ready to put them into the pan. And it really helps to have someone in the kitchen to help you with the dredging and egg, so that your fingers don't become entirely gunked up with egg and flour.
As the eggplant slices are done, remove them from the pan and place them on a cooling rack. This isn't so much to cool them as it is to prevent them from getting mushy as they cool, so that the batter stays nice and crisp.
Once you've cooked all your eggplant, using a cheese grater (or a small knife), grate off large rustic slices of your parmesean reggiano into a bowl or onto a plate.
Now take and randomly layer your eggplant into a pan - some kind of Pyrex, or a brownie pan, or the like will do just fine. As you put down a layer, sprinkle some of your cheese over each layer. But be sure to save out a little bit of the cheese for garnishing the plate!
Pop the pan into the oven for approximately 30 minutes.

If you're making the Easy Spaghetti Sauce, this would be a great time to start it.
After the eggplant's been in the oven for about 10 minutes, start your water for the pasta.
When there's about 10 minutes left to the half hour for the eggplant, you have two choices - either drop everything into a holding pattern so you can open another bottle of wine, or carry on. If you're dropping into a holding pattern, you'll want to drop the oven temperature to about 200° when the half hour is up. You can keep the eggplant good and hot but not overcooked like this for up to about a half hour. If you're not, throw in your pasta so as to have everything come together at the same time.
When it's time to serve, take some of your sauce and toss with the pasta, and put on the plate. Then place a few pieces of eggplant over this, and ladel a little more of the sauce over the top. Sprinkle some of the leftover cheese over the top, and serve.
Enjoy!
Posted by Julieann at 8:48 AM

Sounds yummy. Thanks for sharing and you have a great weekend, too!

I agree with you, an assortment of fresh veggies on a counter always look so wonderful:-) I've never tried Eggplant Parmesan so will copy the recipe!! We grow our own potatoes in our garden so it's lovely never having to buy them...once we dig them all up we put them in the cold room underneath the basement stairs and they last until at least May:-) We usually have between 250 and 500 lbs of potatoes!! Sounds like you'll have a busy weekend...I'm planning on going to the Cavalcade of Colours going on not far from here, will take lots of pictures:-) xox

Your dinner sounds wonderful. Unfortunately, I think I am married to one of the pickiest eaters in the world. He will not eat ANY veggies, other than potatoes. I, on the other hand, LOVE veggies and I LOVE to try new dishes. So, I spend a lot of time making 2 meals, one for me and one for the rest of my family. As expected, my kids are following in my husband's footsteps, especially my youngest. I think I have failed miserably in this department LOL! My oldest will eat a few veggies and is more open to new foods, but my youngest is ridiculously picky. I just hope and pray they grow out of it and start following their mom's lead soon!

This recipe sounds SUPER good!! I LOVE eggplant parmesan and will definitely have to try this! YUMMM!!!

I love hummus, too! I usually make mine because I like to put extra garlic in it!

I have made my own hummus. The La Leche League cookbook "Whole Foods for the Whole Family" has a recipe with tahini sauce and chick peas. It's delicious and easy to make.

I borrowed and returned a WFFTWF cookbook when I first had a baby way back in the 80's. I never got one for myself. So, a few years ago I bought a used one one dirt cheap from online. I really ought to use it more often, as it has some great recipes in it. The cookbook was put together a while ago -- 60's? 70's? Some of the recipes have a lot of fat compared to what we now think of as whole and healthy foods. I'm not sure some of them would be so great for my empty nest hubby and myself -- though they'd probably be just fine for a nursing mom with a young hubby and a growing family.

But, the hummus recipe is too good to miss! If you like, email me and I'll look it up and send it to you.

Julieann
North Georgia, Georgia, United States
My name is Julieann, and I am a SAHM. I am married to the sweetest and kindest man--and he is very handsome too. I have three wonderful children. I enjoy being a wife and mother and taking care of my family--there is nothing more satisfying to me then what I am already doing. God is so very Good!

Wash on Monday,
Iron on Tuesday,
Mend on Wednesday,
Churn on Thursday,
Clean on Friday,
Bake on Saturday,
Rest on Sunday.

This is so awesome!

Blogs I love to Visit

She looketh well to the ways of her household, and eateth not the bread of idleness.
Her children arise up, and call her blessed; her husband also, and he praiseth her.
~~~Proverbs 31:27-28

Me and my husband

Me and My Darling Husband Again

My Very Own Blinkie

Candy made this for me!!

Everyday Is Laundry Day In My home!

A Day in My Life!

Happiness In The Kitchen

The kitchen is the heart of the home

God bless my little kitchen
I love its every nook
And bless me as I do my work
Wash pots and pans and cook.
And may the meals that I prepare
Be seasoned from above
With Thy great blessing and Thy grace
But most of all Thy love.
As we partake our earthly food
The table before us spread
We'll not forget to thank Thee, Lord
Who gives us daily bread.
So bless my little kitchen, Lord
And those who enter in
May they find naught but joy and peace
And happiness therein.

Dear Lord, it's such a hectic day,
With little time to stop and pray,
For life's been anything but calm,
Since you called on me to be a mom.
Running errands, matching socks,
Building dreams with building blocks.
Cooking, cleaning, and finding shoes,
And other stuff that children lose.
Fitting lids on bottled bugs,
Wiping tears and giving hugs.
A stack of last week's mail to read,
So where's the quiet time I need?
Yet when I steal a minute Lord,
Just at the sink or ironing board,
To ask the blessings of your grace,
I see them in my small one's face,
That you have blessed me all the while,
As I stop to kiss that precious smile.

Thank you for Visiting!