The movers are coming any minute. I will try and update as much I can, either here or my Facebook:)

Hugs and prayers to all my dear friends!!!

P.S No more dinner menus for awhile...LOL. We will be eating out this week;)
Posted by Julieann at 8:51 AM 4 comments:

Looking over a notebook I have for everything, has gotten quite big...LOL. When we are all moved in our new home, I am going to revamp my notebook for the home. It needs it. I did it a long time ago, where I made two books, one for my lists and one for my recipes. My recipe book just gets bigger and bigger...LOL. My other notebook is also getting bigger and bigger because I just love to make lists and organize, but I have to stop printing out every organizational printout I find...LOL.

This time next week we should be in Georgia!!! WoW!!!

Dinner was easy, bacon cheeseburgers, steamed rice and salad. I am trying to use up what I have.
Posted by Julieann at 9:03 PM 4 comments: 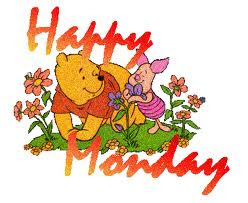 The time is almost here.
I can not believe it...LOL.
This time next we week we should be in Texas on our way to Georgia:)

Oh, we are all so excited.

I finally made it to the salon and used my gift certificate my husband got me for Valentine's day, YaY!! 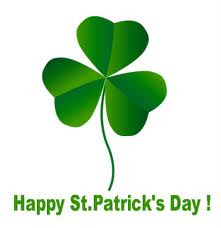 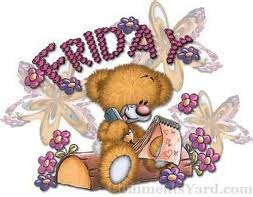 So happy it is Friday!
Lots to do this weekend!
Posted by Julieann at 8:26 PM No comments: 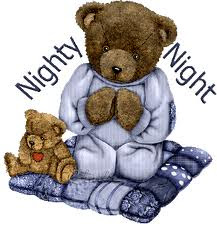 Posted by Julieann at 9:01 PM No comments:

I mentioned over the weekend that I went to Bath and Body. I got three bottles of Warm Vanilla Sugar. They were having a sale, buy 2 get 1 free. 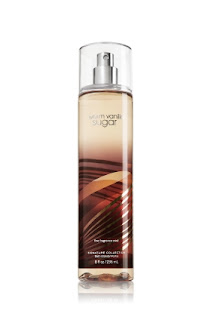 Look at the pretty new spray bottle. So feminine looking. 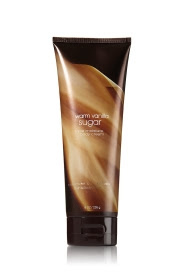 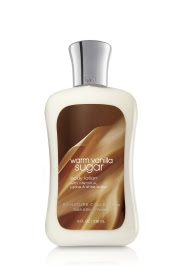 My skin is sensitive, so I moisturize with baby oil during/after my shower. I use the lotions on my hands and feet and part of my arm, they seem to be fine with the lotions. 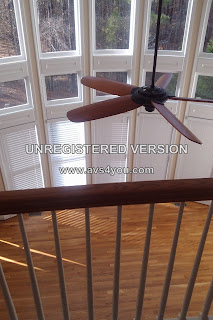 Here are some more pictures of the new house :)
Look at all those windows...LOL. 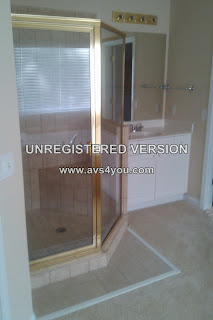 Bathroom in the master bedroom. 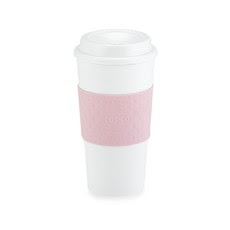 I got this new pink travel coffee cup. I am going to use it when we drive across the country:) The best part is, it is pink...LOL. My husband has one too, but his is brown!

The time to leave is coming quick!!! 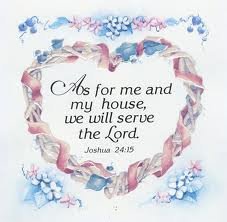 Today was another very busy Saturday!
We took Tiki to get groomed today, she does not care for that, but her nails needed to be trimmed.
Little K got a haircut.
We went to the Mall to pick up a few things.
Costco trip.....We scaled down this trip making sure we just got enough meat for about two weeks. The produce will go fast. Love Costco!

Made Pork chops on the grill, baked potatoes, steamed broccoli, salad with avocados and tomatoes!

I just finished cleaning up the kitchen and mopping the floor.

Oh, I got my Vanilla body spray and lotion at Bath and Body..I love the vanilla spray, smells so pretty to me.

I hope you all have a wonderful evening and don't forget to spring forward tonight.
Posted by Julieann at 8:07 PM No comments: 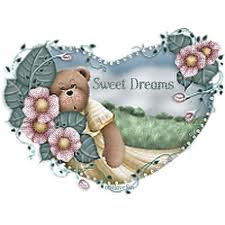 It has been a busy day!
Have a lovely evening:)
Posted by Julieann at 6:32 PM No comments: 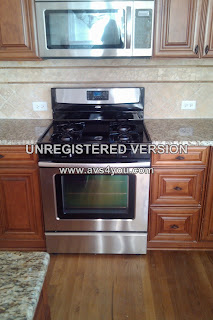 Here are some pictures of the kitchen:) 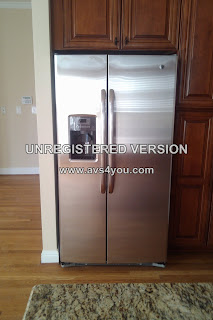 Sorry the picture is blurry, but you get the idea.

I am going to be able to do some serious cooking when we get there:) 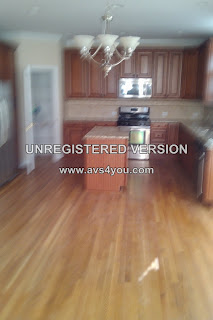 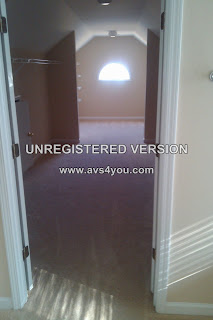 Okay, this is the closet in the master bedroom of our new home. It is bigger then my bedroom here...LOL. Oh, the possibilities I will have with this closet:) I can not wait to hang up our clothes.
Posted by Julieann at 3:27 PM 1 comment: 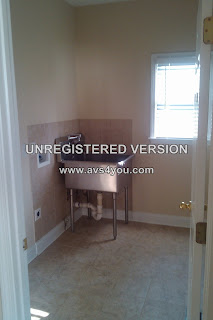 I am super excited of the Laundry Room. It is an actual room. YaY!! It also has a sink. YaY!! I can't wait to get in there and start doing laundry. My very own laundry room. In this house, my washer and dryer are in a closet, so I am excited for this:) My last house in Georgia had a laundry room too. If you go back to the beginning of my blog, there are a few pictures of my home in Georgia, and my old laundry room.
Posted by Julieann at 4:30 PM 1 comment: 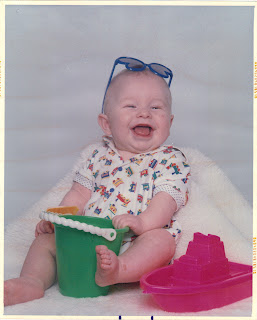 This picture was taken when Tony was about 9 months old. Oh, it seems like yesterday they placed him in my arms. I was in labor for 36 hours before they discovered he was breach and did an emergency C-section. This was truly one of the best and amazing days of my life.
Happy Birthday to my sweet boy, who is now a young man!! 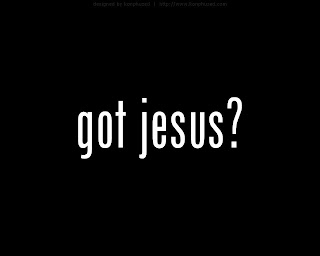 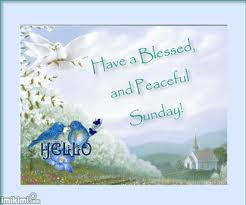 Posted by Julieann at 7:34 PM No comments:

For dinner tonight we had steak and ribs on the grill, roasted asparagus, baked potatoes and salad.

It was quite a busy day in the Gosset home. We replaced the window in the dining room that had a crack in it. Sent off our screens to be fixed that had holes. One, our little dog had scratched and one, Little Kevin poked through. We also got new blinds for Tony's room, that he broke.

I also, went to Walmart and to Albertsons. Cleaned the Living room. I think I am going to do a load of laundry before bed.

It was such a warm day today, too, we took Little K out to ride his bike. Alexis was off with my sister to see the Whale Festival in Dana Point. Remember my sister has a daughter the same age as my daughter, so they are very close. It will be sad to leave Emma.

It was a sundress and sandal kind of day:)

We have about 3 weeks left..it is coming up quick!!

I hope you all have a safe, warm and blessed evening:)
XO
Posted by Julieann at 6:30 PM No comments: 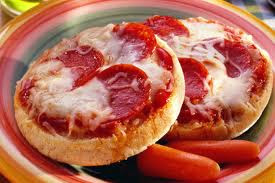 Remember when we were little and we would have English Muffin Pizzas?
Well, that is what I am making for lunch.

Happy Lunch Time!
Posted by Julieann at 10:52 AM 4 comments:

Can you believe that at the end of this month I will be in my new home in Georgia??!!! It seems so surreal to me. I am so excited.

Alexis has had a cough for a couple days, and last night her cough kept her up. I took her to the pediatrician today, who I am sooo going to miss, he is the best!!! She has a bronchial infection, so antibiotics were in order. I think this is the first time, she has ever been on an antibiotic. I was very relieved it was just that, I was worried it might have been a touch of asthma. The Doctor reassured me it was not. He also, gave me more prescriptions for Kevin's EPI pens, and more refills for breathing medications. When we were at the Doctor's, Kevin made sure to tell everyone we were there for sissy and not for him.

Kevin has been in Northern California for the past two days and should be home shortly. I have a pork roast in the crockpot with potatoes and carrots, and I also made a salad. The kids have already ate.


I am getting comfortable driving my new car..I know where every thing is now and it is not feeling foreign to me. I took it on the freeway for the first time today. The neat thing about the car is it came with two years of Serius radio, so I have been listening to Martha Stewart. I also like that it has children's stations. I used to have Serius radio, but Kevin's broke in his car and he took mine to use and I just never got another one...LOL.

I took a lot of pictures down from the walls and the house is starting to look like we are either moving in or moving out...LOL.

With the Doctor's appointment, and going to the pharmacy I did not get much done at home.

I can't remember if I posted we had Hail the other night...but it was LOUD!!!! Little round ice balls falling from the sky...Alexis thought that was so neat.

I still can not get over the idea that we will be in Georgia at the end of this month.....we will be there in time for Easter and Little K's Birthday:)
Posted by Julieann at 5:53 PM 4 comments:

Julieann
North Georgia, Georgia, United States
My name is Julieann, and I am a SAHM. I am married to the sweetest and kindest man--and he is very handsome too. I have three wonderful children. I enjoy being a wife and mother and taking care of my family--there is nothing more satisfying to me then what I am already doing. God is so very Good!

Wash on Monday,
Iron on Tuesday,
Mend on Wednesday,
Churn on Thursday,
Clean on Friday,
Bake on Saturday,
Rest on Sunday.

This is so awesome!

Blogs I love to Visit

She looketh well to the ways of her household, and eateth not the bread of idleness.
Her children arise up, and call her blessed; her husband also, and he praiseth her.
~~~Proverbs 31:27-28

Me and my husband

Me and My Darling Husband Again

My Very Own Blinkie

Candy made this for me!!

Everyday Is Laundry Day In My home!

A Day in My Life!

Happiness In The Kitchen

The kitchen is the heart of the home

God bless my little kitchen
I love its every nook
And bless me as I do my work
Wash pots and pans and cook.
And may the meals that I prepare
Be seasoned from above
With Thy great blessing and Thy grace
But most of all Thy love.
As we partake our earthly food
The table before us spread
We'll not forget to thank Thee, Lord
Who gives us daily bread.
So bless my little kitchen, Lord
And those who enter in
May they find naught but joy and peace
And happiness therein.

Dear Lord, it's such a hectic day,
With little time to stop and pray,
For life's been anything but calm,
Since you called on me to be a mom.
Running errands, matching socks,
Building dreams with building blocks.
Cooking, cleaning, and finding shoes,
And other stuff that children lose.
Fitting lids on bottled bugs,
Wiping tears and giving hugs.
A stack of last week's mail to read,
So where's the quiet time I need?
Yet when I steal a minute Lord,
Just at the sink or ironing board,
To ask the blessings of your grace,
I see them in my small one's face,
That you have blessed me all the while,
As I stop to kiss that precious smile.

Thank you for Visiting!